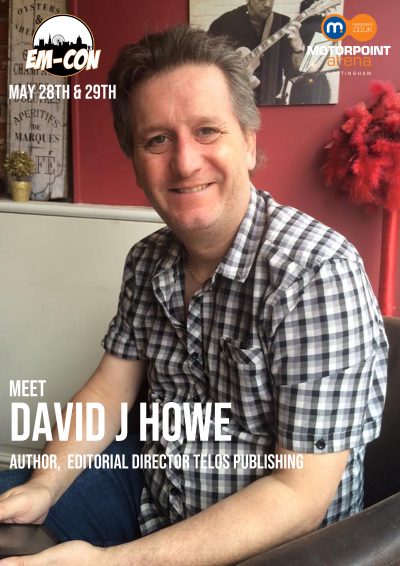 EM-Con is happy to welcome David J Howe to its guest list for 2022.

David J Howe has been involved with Doctor Who research and writing for over forty years. He has been consultant to a large number of publishers and manufacturers for their Doctor Who lines, and is author or co-author of over thirty factual titles associated with the show. He also has one of the largest collections of Doctor Who merchandise in the world.

David was contributing editor to Starburst Magazine for seventeen years from 1984 – 2001. From 1994 he was book reviews editor for Shivers Magazine until it ceased publication in 2008. In addition he has written articles, interviews and reviews for a wide number of publications, including Fear, Dreamwatch, Infinity, Stage and Television Today, The Dark Side, Doctor Who Magazine, The Guardian, Film Review, SFX, Sci-Fi Entertainment, Collectors’ Gazette, Deathray, Doctor Who Insider and the Oxford Dictionary of National Biography.

He edited the bi-monthly newsletter of the British Fantasy Society from 1992 to 1995, and also edited and published several books for them, including the British and World Fantasy Award shortlisted Manitou Man, a limited edition hardback and paperback collection of short fiction by horror author Graham Masterton. He was Chair of the BFS from 2010 to 2011, and edited their fortieth anniversary anthology, Full Fathom Forty, published in September 2011.

He wrote the book Reflections: The Fantasy Art of Stephen Bradbury for Dragon’s World Publishers and has contributed short fiction to Peeping Tom, Dark Asylum, Decalog, Dark Horizons, Kimota, Perfect Timing, Perfect Timing II, Missing Pieces, Shrouded by Darkness, Murky Depths, Terror Tales of London and Flesh Like Smoke and factual articles to James Herbert: By Horror Haunted, The Radio Times Guide To Science Fiction and 1001 Television Series To See Before You Die. He wrote the screenplay for Daemos Rising, a film released on DVD by Reeltime Pictures in 2004, and was contributing writer for White Witch of Devil’s End, a drama released on DVD by Koch Media in 2017. A book of his fiction, talespinning, appeared from Telos Publishing in September 2011.

He is Editorial Director of Telos Publishing Ltd, a UK based independent press specialising in horror/science fiction Novellas, crime novels, and guides to a variety of film and TV shows. In 2006 the company won the World Fantasy Award for their publishing work, and in 2010 celebrated their tenth anniversary while also receiving the British Fantasy Award for Best Small Press for two consecutive years in 2010 and 2011. 2020 marked twenty years of publishing.

He currently contributes liner notes for BBC Audio’s range of Doctor Who novelisation CDs and his latest book is The Who Adventures, a large format illustrated book looking at the history of Virgin Publishing’s Doctor Who fiction.


David J Howe will be appearing at EM-Con 2022 on Saturday & Sunday
Guest Tags: Doctor Who