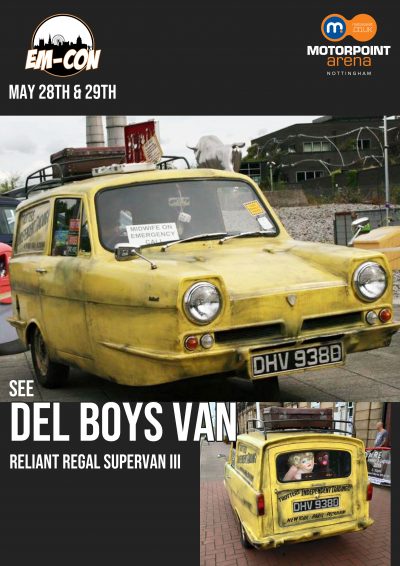 We’re happy to welcome Del Boy’s Van to EM-Con, you’ll be able to get your photo with Del’s van free of charge at EM-Con.
Del Boy’s three wheeled van is a 1967 Reliant Regal Supervan III, with the registration DHV 938D.
Serving as the Trotters’ main mode of transport, the van is also used to store any of Trotters Independent Traders’ stock and transport the family to several destinations. Its top speed is 55 mph and is often described as crappy and old 3 wheeled van by the cast, although it can make long-distance journeys.

The van only has two seats, which means that passengers such as Grandad and Uncle Albert have to sit in the back, along with Del’s stock. The van also has a roof-rack as the boot isn’t big enough.