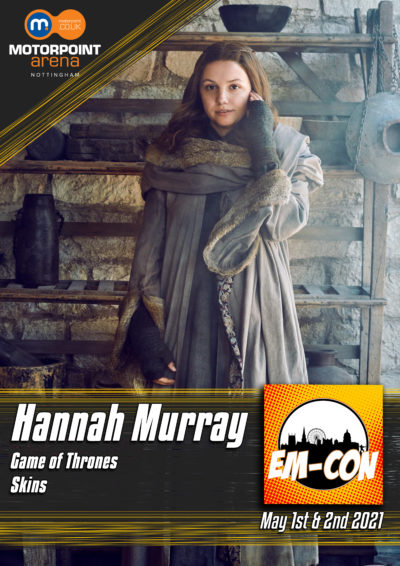 We are delighted to announce that Hannah Murray will be appearing at EM-Con Nottingham.
Hannah is best known for her roles in Game of Thrones as Gilly and her BAFTA Award winning role as Cassie in Skins.

Hannah appeared in Game of Thrones Seasons 2-3 in a recurring role as Gilly and was then given a Main Cast role from season 4 to season 8, the Final season. Appearing opposite John Bradley (Samwell Tarly) Hannah’s portrail of Gilly became a much loved character in Game of Thrones.


Hannah Murray will be appearing at EM-Con Nottingham 2021 on Saturday & Sunday
Autograph Price:£25.00
Photoshoot Price:£25.00
Saturday Photoshoot
Sunday Photoshoot
Please ensure to purchase a photoshoot corresponding to the day(s) you are attending the convention
Guest Tags: Game Of Thrones