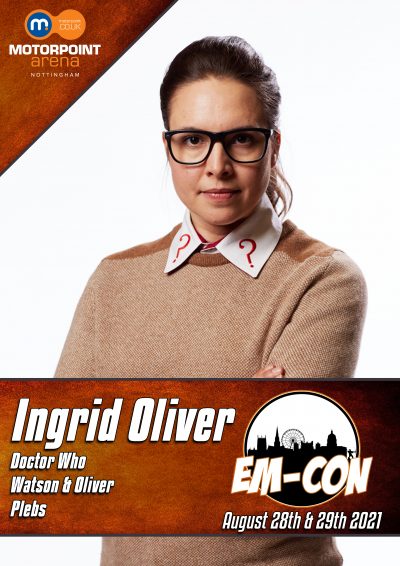 We’re happy to welcome Ingrid Oliver as our guest to EM-Con Nottingham.

Ingrid is known for playing Petronella Osgood, in the BBC television series Doctor Who.

Ingrid was one half of the comedy duo Watson and Oliver, she also played Camilla in Plebs, She also voices the Osgood character in Doctor Who Infinity and Doctor Who: The Lonely Assassins.


Ingrid Oliver will be appearing at EM-Con Nottingham 2021 on Saturday & Sunday
Autograph Price:£20.00
Photoshoot Price:£20.00
Saturday Photoshoot
Sunday Photoshoot
Please ensure to purchase a photoshoot corresponding to the day(s) you are attending the convention
Guest Tags: Doctor Who