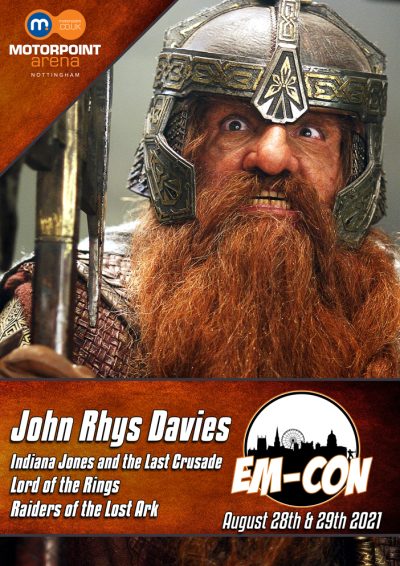 Lord of the Rings, Indiana Jones and the Last Crusade, Raiders of the Lost Ark

John is best known for the role of Gimli and the voice of Treebeard in the Lord of the Rings trilogy and Sallah in the Indiana Jones films. He also played Michael Malone in the 1993 remake of the 1950s television series The Untouchables, Vasco Rodrigues in the mini-series Shōgun, Prof. Maximillian Arturo in Sliders, King Richard I in Robin of Sherwood, General Leonid Pushkin in the James Bond film The Living Daylights, and Macro in I, Claudius. He provided the voices of Cassim in Aladdin and the King of Thieves, Ranjan’s father in The Jungle Book 2, Macbeth in Gargoyles, Man Ray in SpongeBob SquarePants, Hades in Justice League and Tobias in the computer game Freelancer.


John Rhys Davies will be appearing at EM-Con Nottingham 2021 on Saturday & Sunday
Autograph Price:£30.00
Photoshoot Price:£30.00
Saturday Photoshoot
Sunday Photoshoot
Please ensure to purchase a photoshoot corresponding to the day(s) you are attending the convention
Guest Tags: Lord Of The Rings