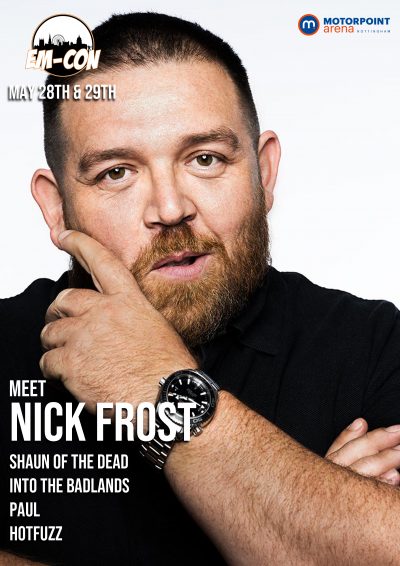 Shaun of the Dead, Hot Fuzz, and The World's End.

We are excited to announce that Nick Frost will be joining us at EM-Con Nottingham.
Nick is best known for his work in the Three Flavours Cornetto trilogy of films, consisting of Shaun of the Dead, Hot Fuzz, and The World’s End.
Television credits include sitcom Black Books, Hyperdrive, Man Stroke Woman, and the Dr.Who Christmas special as ‘Badass Santa’. He was a series regular in AMC’s popular show Into the Badlands, and most recently he starred in series The Nevers. He also had the lead role of Gus in Truth Seekers, a series he created and co-wrote.


Nick Frost will be appearing at EM-Con 2022 on Saturday & Sunday
Autograph Price:£35.00
Photoshoot Price:£35.00
Saturday Photoshoot
Sunday Photoshoot
Please ensure to purchase a photoshoot corresponding to the day(s) you are attending the convention
Guest Tags: Sci-fi, Fantasy, Doctor Who