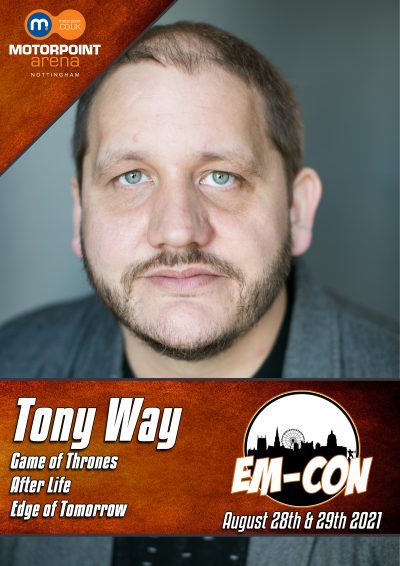 Game of Thrones, After Life, Edge of Tomorrow

We’re happy to welcome Tony Way as a guest to EM-Con this year, Tony is an English writer, actor and comedian known for a variety of roles across film and television, most notably the portrayals of Dontos Hollard in Game of Thrones, Lenny in After Life, and Kimmel in Edge of Tomorrow. Tony has appeared in various films including The Girl with the Dragon Tattoo, Ali G Indahouse, Down Terrace, and Sightseers. Tony is currently portraying the role of Lenny in Ricky Gervais’s After Life, but has appeared in other TV shows such as Drunk History, Sherlock, Derek, Doctor Who and Jekyll and Hyde.


Tony Way will be appearing at EM-Con Nottingham 2021 on Saturday & Sunday
Autograph Price:£15.00
Photoshoot Price:£20.00
Saturday Photoshoot
Sunday Photoshoot
Please ensure to purchase a photoshoot corresponding to the day(s) you are attending the convention
Guest Tags: Sci-fi, Game Of Thrones, Doctor Who, Comedy