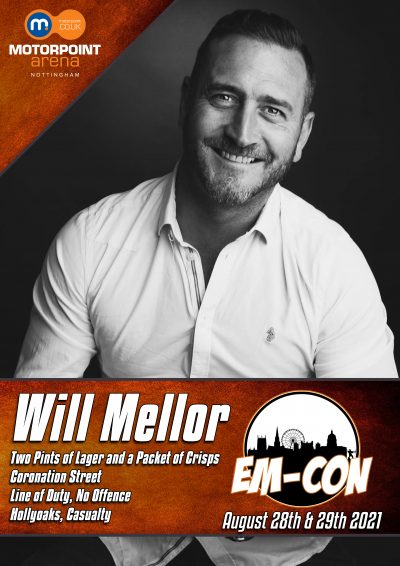 Two Pints of Lager and a packet of Crisps, Hollyoaks, No Offence

We’re very excited to announce that Will Mellor will be our guest for EM-Con Nottingham this coming August.

Will is best known for his roles as Jambo Bolton in Hollyoaks, Gaz Wilkinson in Two Pints of Lager and a Packet of Crisps, DC Spike Tanner in No Offence, Steve Connolly in Broadchurch, Georgie in Barking!, and Ollie Curry in White Van Man, in 2016 saw him take up the role of PC Rod Kennedy in Line of Duty and in 2021 he took up the role of Harvey Gaskell in ITV soap opera Coronation Street.
Recently Will has been part of the duo bringing us the fantastic podcast Two Pints with Will and Ralph, which he co-produces and stars in along with his Two Pints co-star Ralph Little.

Will is one of the guests we get asked for a lot at EM-Con and we’re happy to be able to get him along to see his fans.


Will Mellor will be appearing at EM-Con Nottingham 2021 on Saturday & Sunday
Autograph Price:£20.00
Photoshoot Price:£25.00
Saturday Photoshoot
Sunday Photoshoot
Please ensure to purchase a photoshoot corresponding to the day(s) you are attending the convention
Guest Tags: Comedy