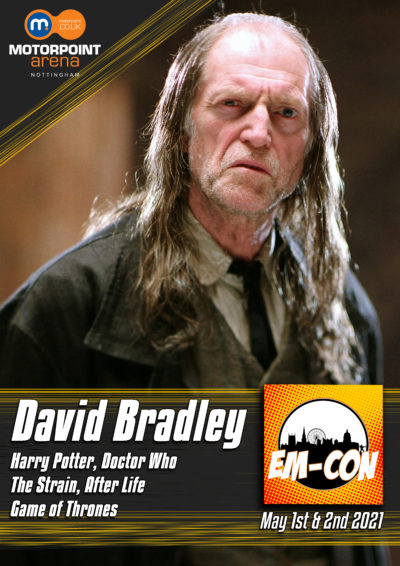 We are happy to announce that David Bradley will be joining us for EM-Con 2021.
David is best known for playing Argus Filch in the Harry Potter film series, Walder Frey in the HBO fantasy series Game of Thrones and Abraham Setrakian in the FX horror series The Strain. He is also an established stage actor with a career that includes a Laurence Olivier Award for his role in a production of King Lear.
He also portrayed William Hartnell in the Doctor Who docudrama An Adventure in Space and Time and had a recurring role on the ITV crime series Broadchurch. He returned to Doctor Who portraying the First Doctor in “The Doctor Falls” and the 2017 Christmas Special “Twice Upon a Time”.


David Bradley will be appearing at EM-Con Nottingham 2021 on Saturday & Sunday
Autograph Price:£30.00
Photoshoot Price:£30.00
Saturday Photoshoot
Sunday Photoshoot
Please ensure to purchase a photoshoot corresponding to the day(s) you are attending the convention
Guest Tags: Game Of Thrones, Doctor Who